I’ve spent the last few weeks doing too much travelling, and also moving house both into a studio and a summer pad. My apartment needs a whole bunch of earthquake strengthening so it doesn’t go all dominos when New Zealand inevitably gets hit by the Big One. This has necessitated a lot of stress and a lot of wine drinking. I have been trying to mitigate the stress by sewing in my new studio while drinking wine.

I’ve been working more on the chevron quilts, and also on the Fair Isle quilt-along.I’m horribly belong in the quilt-along, but I’m going to beg off that on account of having been away for 2 of the 4 weeks it has been running for. The poinsettas are almost done, to give you some indication of where I’m at. In keeping with my vaguely music blog leanings, I’ve spent a lot of time listening to Dio’s Holy Diver (thanks Alice for the suggestion).

I’ve spent the last three days at home dealing with some family stuff which has come up. I was supposed to be staying with my Ma, but instead I’m staying with my parents. I’ve spent a lot of time feeling a bit useless because there has been nothing to do but wait for a time, and so I’ve gotten some sewing done. I’ve been quilting up the chevron quilts and all they have left is to hand stitch down the binding and they are ready to go to their new home. I quilted them with two seams on each side of each chevron alternating thread colours. I didn’t mark the sewing line, just judged it by the edge of the foot. Functional and reasonably pretty.

Among the sewing I’ve been doing has been some coasters from offcuts of the baby quilts. So far: the yellow and orange have been completed and I’ve resurrected my Etsy to list them if you are just desperate to own a piece of Megan Memorabilia yourself.

Photos! To make up for this morning’s text only post. I was as good as my word(s) though and finished off the corset. Here’s an aerial view.

Plus some close ups of the crystals. They’re Swarovski hot fix in ‘crystal volcano’ and they change from red to purple to green to gold. Looooovely. Even if my sister has accused me of ‘going all pageant mum’ with my recent fondness for sparkle. (To be honest, I’m beginning to doubt her commitment to sparkle motion…)

Soundtrack while I was applying the crystals was a bit more pop than my usual. The last week I’ve been playing Patrick Stump’s solo releases high rotate. I’ve particularly fond of Spotlight (Oh Nostalgia). Go listen to that and imagine me dancing to it at bus stops all week and awkwardly stopping when someone else walks along the street. I decided that you can’t bedazzle things while listening to Anthrax, so my entire afternoon has been songs I can shake my ass too.

Back to the corset though, here’s a view of the hand bound eyelets I mentioned. I considered going over with a second layer of thread to hide the brass totally, but decided I sort of like it being visible.

And the contrast lining:

Hopefully I can put up a picture of my sister wearing it when I give it to her in a fortnight’s time.

I also got a bit more done on the quilt-in-progress I’m working on. I ran out of thread, otherwise I’d have gotten a bit more sewn up tonight.

I’m kind of loving how quickly the herringbone pattern comes together. I reckon I can probably knock out the whole thing in a few hours of solid sewing. (Except it won’t be happening tomorrow because, as I discovered a few weeks back, buying thread in Wellington on a Sunday? Not A Thing.

Guess what’s happened since the last time I posted? I’ve gotten stuff done! I’ve pressed the dress, dropped my old clothes off at the op shop and although I haven’t finished the cape that’s largely because I haven’t been home at an hour when I could have reasonably sewn it without waking up my long suffering flatmate.

As a reward for my good behaviour/because I am like 96% done with my current project (I am, shut up)/because today was pay day I went fabric shopping. On the current to do list: a corset for my sister’s birthday and a surprise quilt for some friends of mine. I got all the fabrics for my sister’s corset today and most of the fabric for the quilt.

Look! Brown and green for the quilt:

And red for the corset:

The cherries are for the lining (I am a sucker for cute linings on corsets) and the outer is a lovely slubby red dupioni silk. Here is where I have to speak up in support of Sherazad Silks in Wellington, which is a fabulous treasure trove of jewel tones and metallics. Yum. (Also, if you would like to attract dubious attention in a quiet office try using the word ‘slubby’ in casual conversation.)

To anyone who has worn/made a corset before I’ll be teaching my grandmother to suck eggs with this observation, but the height of the back should be not far off the height of the front. Basically if whoever is wearing the corset is in any way busty (larger than a small B cup) then you need the height at the back of the corset to cantilever the support at the front. Otherwise when you lace it the front around the bust has nothing bracing it and everything becomes a bit of a wardrobe malfunction risk.

My drafting method basically consists of drawing a line across a piece of paper and then ruling a line for the waist and the other measurements relevant to it. It’s not very easy to explain and my ability to draft like this and have things still fit is based mostly on the fact I spent my teenage years sewing tens of corsets and not going to parties. (The not going to parties isn’t necessary, but it did give me lots and lots of time to spent perfecting my freehand drafting skills.)

Here’s how the pattern looks (I opted for an eight piece design because it doesn’t have heeeeeaps of waist reduction.)

The phone is actually there acting as a calculator because it’s freaking 2am and I didn’t want funky arithmetic to affect my drafting. I’m trying out a new method of construction (for me) with this corset. I used to be a huge fan of 5 layer corsets with internal boning channels. This time around I’m trying external boning channels and self-fabric binding in the hopes of not annihilating my sewing maching with great chunks of fabric. This is the backing for the dupioni which I’m using to brace it against the strain the corset will be under, a heavy calico being cut out:

You can see my notes on the pattern about where the boning needs to go and how long it has to be (in this example 42S means a 42cm piece of spiral steel over that seam.) Have some more gratuitous construction shots:

The final corset will have a ruffle at the top over each cup and a sweetheart neckline. I also discovered today just how easy it (reportedly) is to attach rhinestones to things and let me tell you, as much of my next paycheque as the need to eat will allow is going to an assortment of rhinestones which I plan to attach to everything I can. The corset will very likely be on that list. Watch this space.

I didn’t sew any of the corset tonight because sewing machines are loud and my flatties are sleeping, but instead I cut a bunch of the quilting fabric into strips, inspired by this fabulous Stitched in Color tutorial.

Fuelling tonight’s spree of productivity was an album by a local band called Spook the Horses. It’s their debut Brighter and it is really astoundingly, fantastically, crushingly good.

If you enjoy doom/post rock (and quilting, apparently, if you’re reading this blog. Hi, in that case. It makes two of us.) I highly recommend grabbing a copy from their bandcamp. 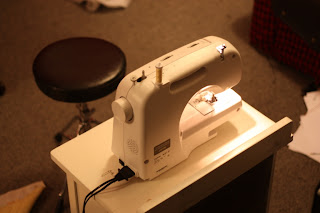 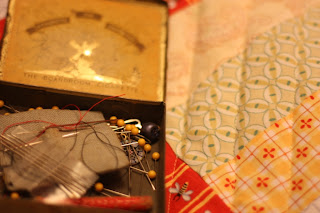 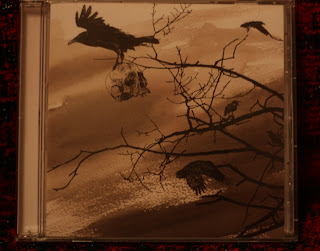